The knock-on effect of accessible sports

For over a century, Australians have been pulling up their socks and throwing on their team jerseys to play the beloved game of rugby league. And for the hundreds of thousands of people who run onto their local fields each weekend, rugby league is an opportunity to play the game they love, make friends and keep fit.

But for the many Australians with disability, playing rugby league has been a dream unlikely to come true – until now.

Queensland’s Glitter Strip is now home to the first LeagueAbility Teams, a rugby league code designed so people with physical and intellectual disabilities can get in the game.

Formed in 2018 by National Rugby League (NRL) club Gold Coast Titans, the idea for LeagueAbility came from a group of passionate players with disability in Ballina. Gold Coast Titans’ General Manager of Community and Game Development, Renee Cohen said that seeing the players was a lightbulb moment for the club.

“The players were training every Wednesday down in Ballina. They each had physical disabilities which prevented them from playing in the traditional league, but we knew they should have the opportunity to play rugby league,” she said.

“Essentially they were training and weren’t able to play and games and we wanted to change that.”

Since its inception almost three years ago, the single team has grown to over 45 players who train and play once a week.

One of the players, 37-year-old Cameron Hunter said the opportunity to play has been life changing.

“Words can’t describe the feeling I get when I put on the jersey,” he said.

Diagnosed with cerebral palsy as a child, Cameron never thought a high-contact team sport would be possible, let alone playing as a forward.

“I play in the forward position and love it. I’m just in awe that I can be out there playing for a professional sporting team like the Gold Coast Titans,” he added.

“My dad used to play football and I always wanted to play but never had the opportunity [because of my disability]. But now I can, and I know it makes my dad proud,” he added.

Despite the players each having their own disability, the game itself does not differ much from the normal NRL game.

“The rules are adjusted ever so slightly,” Renee said.

“The guys want to play rugby league just as their mates and heroes do, so we make minor adjustments depending on the person’s needs. This could be something such as different coloured shorts if a person can’t be tackled and shortening the game time for others.”

And for players like Cameron, this is what makes the program so rewarding.

“We’re actually playing at the same level as the Titans,” he said.

“The coach puts us through the same drills as the A-grade team and we even share the same facilities as them.”

The players are also taught important drills on how to land safely in a tackle, how to tackle safely and how to play their first game.

“It’s really important to us that they have these basic skills down pat before they take the field,” Renee said.

As for what’s next for the team – hopefully a lot more games and a whole heap of opportunities.

“Ideally we’d love to grow the league to have more teams, not just on the Gold Coast, but around Queensland and even Australia,” Renee said.

“The teams will be the curtain opener at two Titans’ home games this year and we hope to have them playing more local games during 2021 as well.”

For Cameron and his fellow players, the program continues to change their lives and makes the world of difference to many people with disability, who just want to play sport.

“It means the world to people like me and my mates… I can’t thank the Titans enough. Words can’t describe the impact it’s had on me.”

If rugby league isn’t your preferred sport, Rugby Union is also on offer through the Modified Rugby Program (MRP) at local clubs across Brisbane, Redlands, Toowoomba and Townsville.

Founded in 2014 by the GingerCloud Foundation, the Modified Rugby Program has grown to over 250 participants and offers clear pathways to the sport from ages seven to 25.

Co-Founder of MRP and Managing Director of GingerCloud Megan Elliot told Rugby Australia that the program's goal was to encourage more children and young adults with learning and perceptual disability to play through a touch-only format.

“The program embodies what Rugby is all about: Passion, determination, commitment and above all, community,” she said.

And if you prefer the world’s most popular sport football code (soccer), the North Brisbane suburb of Keperra is home to the Brisbane Paralympic Football Program (BPFP).

Started in 2006 under the watchful eye of head coach Jay Larkins, the BPFP is now a breeding ground for talented players with a disability, including Jay’s son Jarrod, who has cerebral palsy.

“All members of society deserve to be involved with sport,” Jay told Touchstone in a previous interview. 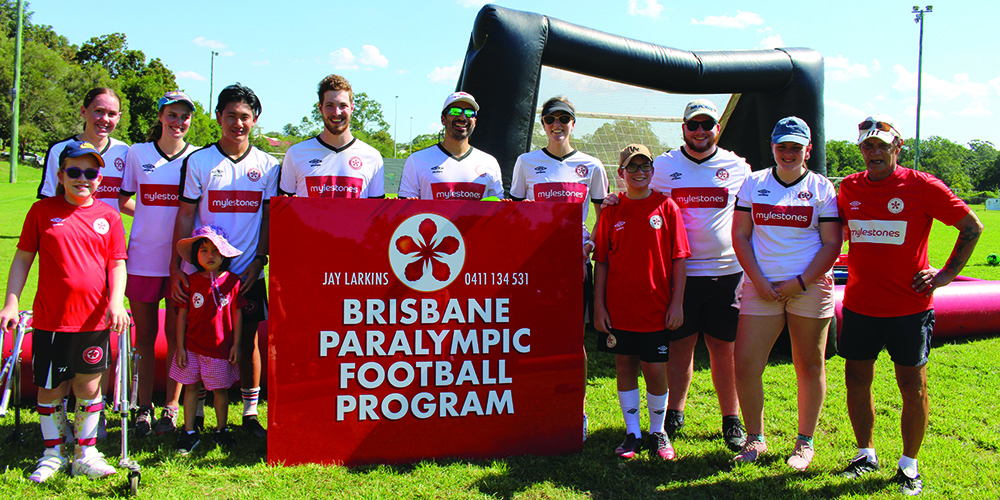 “It gives people a sense of belonging and I strongly believe no matter your ability, it is your right to be involved.”

If you would like to know more about the Brisbane Paralympic Football Program, check out our interview Jay here.