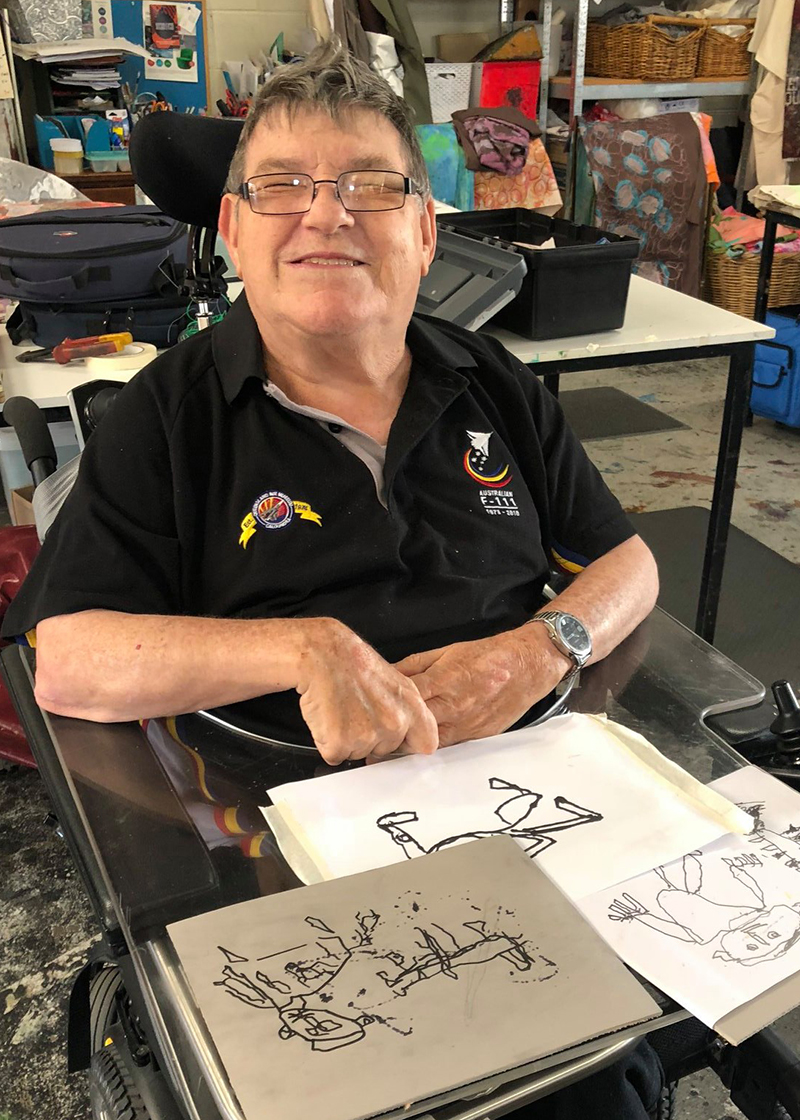 In memory of Robert Gallagher

CPL pays tribute to Robert Gallagher, one of our most beloved clients who was almost with us from the beginning.

Leaving a mark on everyone he met, Robert was a practicing and well-known artist and musician and will long be remembered for breaking down the barriers of disability, his leadership in helping to develop CPLs Cascade Place as a centre for the arts and a lifetime of creative achievements.

Robert first joined CPL at a school in New Farm in 1948, when he was just six-years-old. Back then, one litre of milk cost 30 cents, you could purchase a new car for $1500, Ben Chifley was Australia’s Prime Minister, and most importantly (we think), CPL was started in Brisbane by a group of parents who imagined a better world for their children.

In those days, Robert said, students would get everything from schooling to therapy in one place, and busses would drive students from Redcliffe and Clayfield to New Farm every day.

“One of my favourite memories is of a song I used to sing at the school, the old Doris Day Version of Que Sera, Sera. I heard it on the radio and liked it so much that I took it to the teachers at school and they let me learn it properly. I was able to sing it at the school concert. It went ‘whatever will be, will be, the future’s not ours to see.’”

Robert said what he learned at CPL’s school in New Farm later influenced his love for all things creative.

“I have enjoyed so many things,” he said.

“I’ve been with CPL all my life, really. I’ve lived in Redcliffe for 35+ years and had a hand naming CPL’s Redcliffe service: Cascades.”

It was a name that stuck and has since come to describe the creative hub in Redcliffe that features a range of artistic programs, including painting, textiles, music and a dinner club where Robert was a mainstay.

“I’ve been in nearly every Cascades Art Exhibition since it began in 1993. I created artwork, designed textiles and even wrote a few songs that were produced at Cascades,” Robert said.

“Plus I’ve done around ten years of sailing, I’ve been swimming and been on a motorbike. I’ve studied at University and TAFE while being supported by CPL.”

If you would like to learn more about Robert, his passion for life and the indelible mark he left on the people around you can watch the short film he produced with some of the other CPL clients and staff at Cascade Place below.

Content warning:  Robert’s video contains some historical words and content that may be upsetting to viewers and deemed offensive today. The video was produced by Robert and is told from his perspective only. It should not be considered a reflection of the current practices, therapies or terminology relating to people living with cerebral palsy or any other disability.

Would you like to share your experiences with Touchstone? We'd love to hear from you email [email protected] with your story.