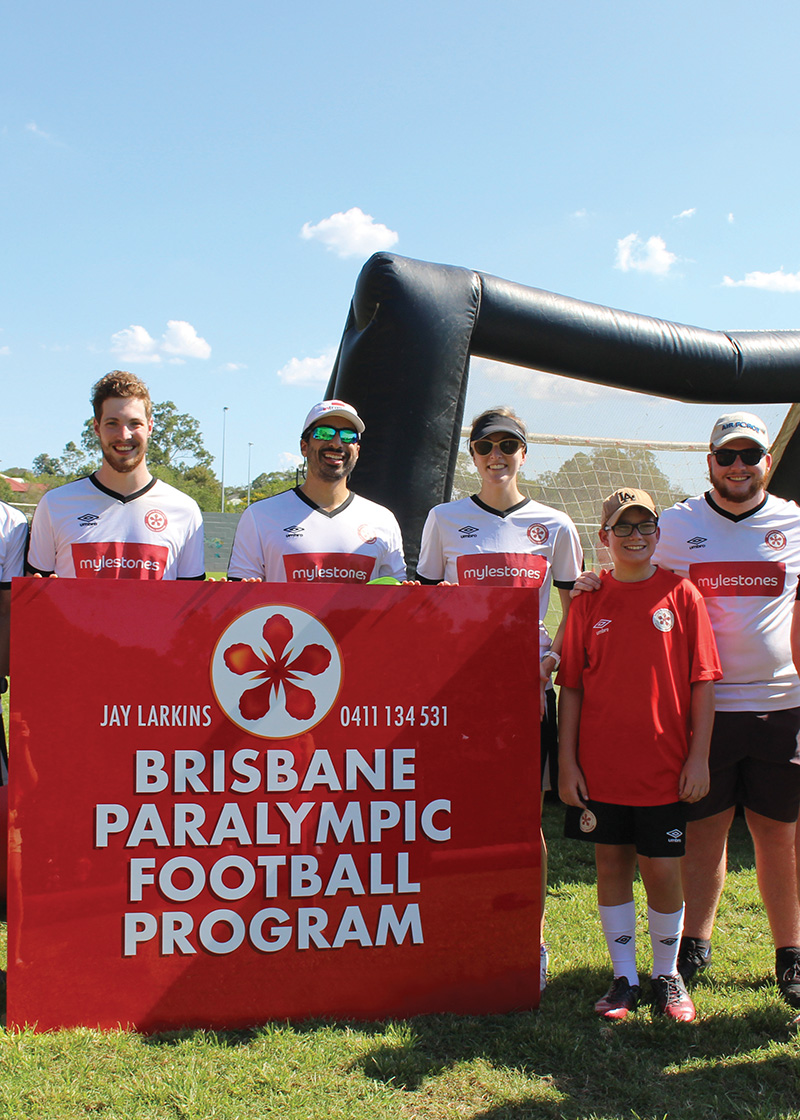 Get in the game!

Jay Larkins tells us about his community football program that’s changing the way the game is played in Queensland.

Is it soccer or football? It’s the age-old debate that divides players, spectators, and fans around the world. No matter what you call it, football is, by far, the most popular sport played by Australians. Over 1.1 million Aussies pull up their socks and lace up their boots to play the game credited for the careers of David Beckham, Cristiano Ronaldo, Lionel Messi and our very own Tim Cahill.

In the North Brisbane suburb of Keperra, you’ll find the next generation of football elite. Under the watchful eye of Jay Larkins, the Brisbane Paralympic Football Program is making leaders on and off the field.

“The idea for the Brisbane Paralympic Football Program (BPFP) came after my son Jarrod was diagnosed with cerebral palsy,” Jay said.

“He wanted to play football but because, at that stage of his life, he was unable to walk or run as well as most children his age, he couldn’t participate in what’s known as mainstream football.”

A proud football fan himself, and not one to be discouraged, Jay approached Westside Grovely Football Club. With the Club’s support, a handful of passionate parents established the first inclusive football program in Brisbane. Its aim? To ensure all members of the community, no matter what their ability, have the opportunity to play football.

“All members of society deserve to be involved with sport. It gives people a sense of belonging. I strongly believe no matter your ability, it is your right to be involved,” Jay said.

It’s this unwavering passion for inclusion that has seen the program succeed. From its humble beginnings of just 12 players, the program has grown to accommodate over 100 participants and is the endorsed provider for inclusive football of Football Queensland.

Mylestones Employment’s Regional Manager Quita Brown was first introduced to the BPFP eight years ago and has seen the power of the program firsthand.

“It’s an inclusive environment where everyone can participate and enjoy sport, connect with their community, make friends and develop confidence. You watch people grow before your eyes,” Quita said.

As with all local sporting clubs, the BPFP relies on sponsors and supporters. Quita said it wasn’t hard to choose to support the BPFP after meeting Jay.

“Jay has devoted his life to improving the lives, health and happiness of people with disabilities. He completes 75 per cent of his work on a voluntary basis and he truly deserves to be acknowledged for his tireless efforts,” Quita said.

“We’re really excited to be sponsors of the BPFP and proud to sponsor the sports jerseys for all the volunteers and staff.”

Since its inception in 2006, the BPFP has been a breeding ground for talented players. One of those players is Jay’s son, Jarrod. He’s represented both Queensland and Australia, as well as being a mentor to kids with cerebral palsy off the field.

“For Jarrod to go from not being able to walk the same as other kids his age when he was five, to having the pleasure of representing Australia 17 times in the sport he loves speaks for itself,” Jay says proudly.

“It’s not just about representative football, and you certainly don’t have to be an elite player to get involved. We want everyone to experience football, no matter your ability.”

Whether you think it’s called soccer or football, one thing is for sure – the Brisbane Paralympic Football Club is leading the way for inclusive and adaptive sporting programs in Queensland. They are leaders, champions, and passionate advocates for accessible football, and we can’t wait to see what they achieve next!

Want to know more about the Brisbane Paralympic Football Program? Or want to sign up? Visit http://bpfp.com.au/.