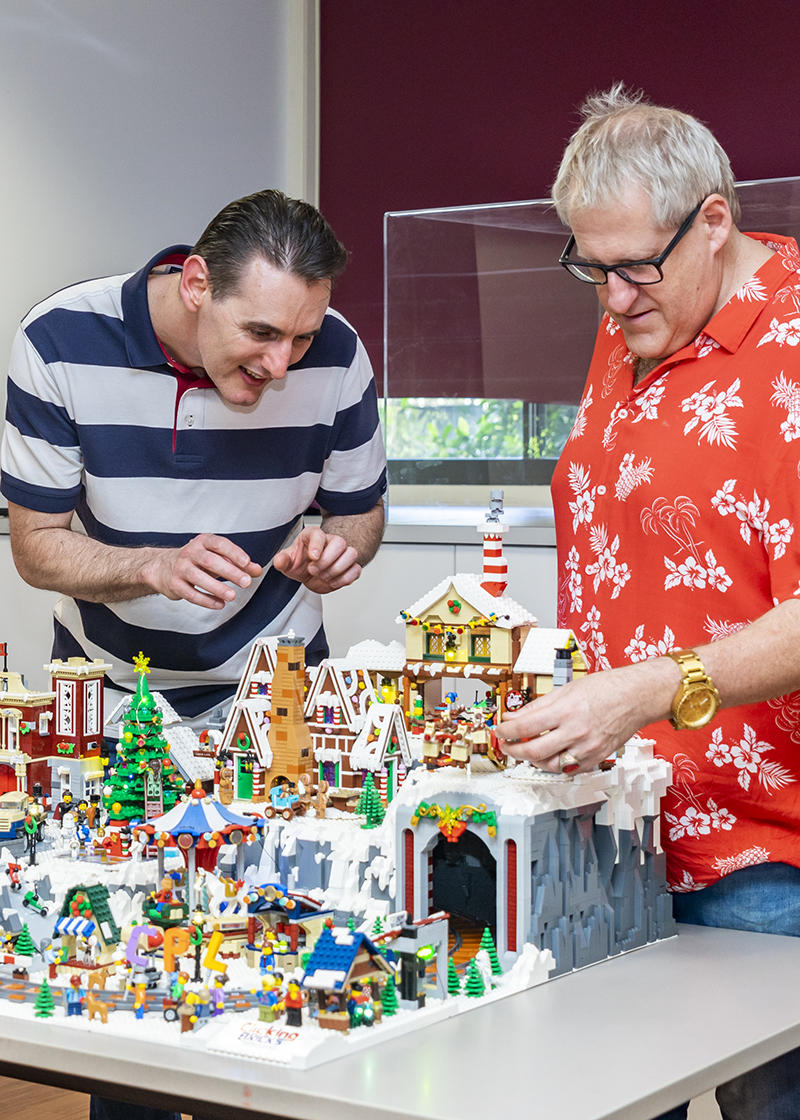 The duo created an amazing LEGO display which took over 40 hours to build. The one-of-a-kind LEGO display features 21,000 bricks, 20 lights and a remote-controlled LEGO train.

Complete with a winter village, Damian said he and Andrew created the display to say thanks to CPL’s therapists for the vital work they do in the community and to brighten up the days of our clients going through therapy.

"We wanted to make a display that captured the wonder of LEGO and could be appreciated by all those who come into the centre, young and old," Damian said.

"We know CPL therapists do amazing work with children and adults with disability throughout the year and we wanted to spread some cheer by creating something that could be displayed in the waiting room."

The LEGO display includes Minifigs using wheelchairs and walking aids to be representative of people with disability. CPL Speech Therapists also created an alternative Communication Symbol board so that people who use pictures, rather than speech, can communicate what they see and like best about the display.

Damian said he hoped the LEGO display would inspire children and adults alike to tap into their creativity.

"We usually build displays that are our own creations but sometimes we like to take LEGO sets that anyone can buy and with some extra bricks and create a whole world," he said.

"In this case, we have built a multi-tiered mountain landscape which helps give each of the sets their own space. The extra features such as bridges and roads, join the multiple Minifigure stories, which brings the whole scene together.

“We are hoping to inspire people to think beyond their boxed sets and use other parts they may have at home and to expand into their own creations.”

Damian said LEGO has long been a favourite of children and adults alike, selling more than 75 billion bricks annually and has people around the world spending a collective five billion hours playing with the bricks each year.

“It is the ultimate toy since it can be turned into absolutely anything!” Damian said.

“It’s also very accessible for all ages, abilities and level of skill which has made it such a family favourite for generations.”

Recently, LEGO released a series of Braille Bricks which has allowed blind or visually impaired children to participate.

Each brick in the Braille Bricks toolkit retains its iconic form, but unlike a regular LEGO brick, the studs are arranged to correspond to numbers and letters in the Braille alphabet.

The LEGO Braille Brick project is entirely not-for-profit and has been created in partnership with the LEGO Foundation and LEGO group.